DavBlog has made BBC radio programmes available as a simple list of realplayer links. (The code is here.)

Posted by tomski at 12:30 PM
My Fave John Peel Quote

When it comes to the interweb, it pays to keep things sloppy.

Posted by tomski at 09:59 PM
More dusty stuff found on the webserver

In 1996 I spent 2 days in Singapore en route to NZ with my dad and sister.

I hated Singapore. With a passion.

Luckily I'd successfully blagged the loan of a very early Casio digital camera, had brought my Powerbook 160 along with me, and found a cypercafe.

Thus equipped, I kept myself entertained as best I could.

While cleaning up tomski.com I found this, which is a PDF I made when applying for an MSN UK Community Producer job back in 1996. (I got the job, but couldn't face the prospect of a commute to Reading so said no thanks)

It's made me realise I've not had a new idea in terms of online community since then, and should probably go and get my coat.

Posted by tomski at 12:46 AM
The Honourable Fiend

It's called The Honourable Fiend.

Thus far, I am liking it much.

Posted by tomski at 12:02 AM
How does your MP perform?

Fresh from picking up another award, FaxYourMP.com has just published a new and up-to-date "response rate" league table for MPs.

Good to see that the stats seem to be heading in the right direction, with MPs having improved their overall average by 1% (from 62% to 63%) since last year.

Also interesting to compare how Tory MPs (72%) compare with their Labour (60%) and Lib Dem (57%) counterparts.

These data also appears on , to which we've recently added MP's expenses claims for the past 3 years.

BBC News Interactive has started to publish a list of the most popular stories from the previous day.

Good stuff. Archive data will be available too.

Even more interesting is the list of which stories got emailed to other people the most (at the bottom of the page - sorry, no anchor link).

Of course, being a stats glutton I want more. An RSS version, for example. And a list of the stories with the most non-BBC referrers (ie the most broadly linked-to).

Posted by tomski at 06:50 PM
Power of Nightmares- Beyond The Broadcast

The final episode of Adam Curtis' thought-provoking series 'Power of Nightmares' was broadcast on BBC2 ten days ago.

In broadcast terms, the series is now history. You might see it return on BBC4 in a few months' time, late night, to fill the schedule. But for most of us, it's been and gone. Dead. If you missed it, tough.

Well. Not quite. Must-see TV now lives on well beyond the broadcast on the internet, regardless of whether the people making the show want it to or not.

A week ago, the three episodes of Power of Nightmares were in the top 10 most downloaded BitTorrent files for UK users. (BitTorrent is a peer to peer technology popular amongst those who download TV via the internet)

Even PopBitch, a celeb gossip email newsletter, got in on the act, encouraging its 250,000 recipients to download episodes 2 &3, and supplying the all-important links to the files.

Today I came across word for word transcripts of all three episodes. Hosted on a belgian website.

How do I think the makers feel about a show made with public service intent having a life on the net well beyond the broadcast window?

Pretty darn happy, I would hope. The internet is a wondrous medium for TV & Radio shows made with a public spirit, rather than a profit motive. 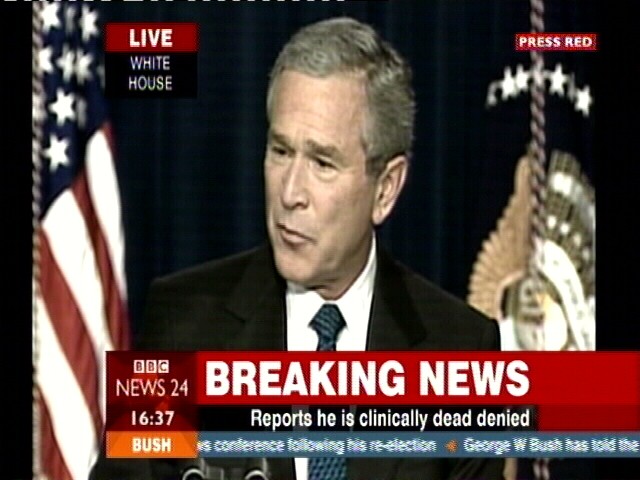 Following its successful experiment with downloadable MP3 versions of the 2004 Reith Lectures, BBC Radio 4 has just published a downloadable MP3 of Melvyn Bragg's Radio 4 show 'In Our Time' as an MP3.

Demos, which usually gets described as Blair's fave think tank, is about to publish a report on an emerging 'Pro-Am Revolution'.

It's co-authored by Charlie Leadbetter, which should at very least ensure that the prose is lucid.

As a staunch proponent and supporter of the Pro-Am model, it's good to see this model's potential being taken seriously by the wonks think tanks.