I'd forgotten I'd made this a few months ago.

It's a Bloglines aggregation of the TheyWorkForYou.com MP RSS feeds for all members of the Parliamentary Committee for Culture, Media & Sport.

I like it, partly cos I made it, but partly cos it shows how easy it is to create new slices through Hansard - views on the democratic process which are simply impossible using the official Parliament.uk version of Hansard. I also like it because it took me about 5 minutes to set up, and costs nothing. Previously only lobbyists with deep pockets could get hold of this slice of data. Now it's all yours, for free.

It's fun seeing how many of them contributed to the recent Oral Questions (aka a mini-debate) on the BBC Charter.

I must remember to tell people about the newish index Phil made containing links to the TheyWorkForYou.com page of each and every MP.

Posted by tomski at 11:14 AM
Barney at Matt & Fiona's Wedding 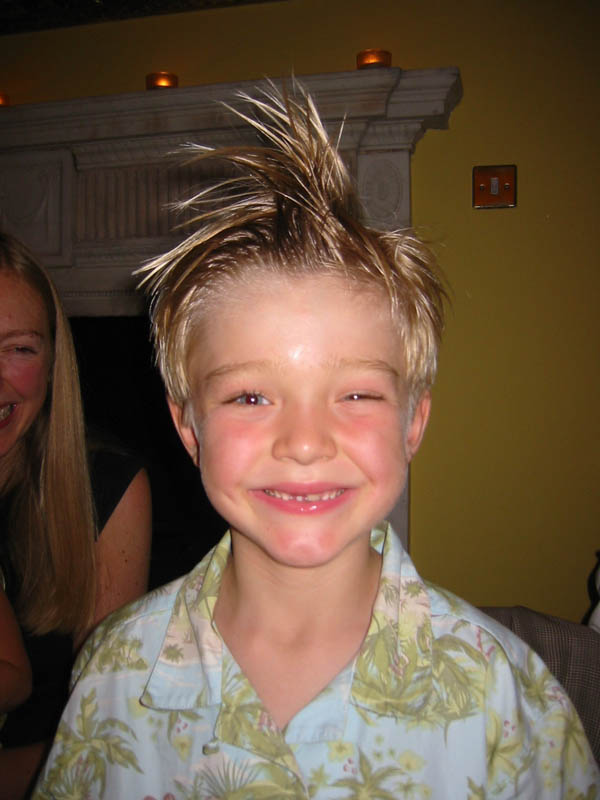 With the help of much Vaseline (!)

Posted by tomski at 07:57 PM
Dinghy Sailing In Poole Harbour

Last week I spent a couple of days sailing my Wanderer dinghy around Poole Harbour with an old friend. I wrote up a 'Cruising Log' as is the done thing.

The Wanderer Class Owners Association website offers exemplary information plus instant access to experts and experience. It's a major resource for someone new to this class of dinghy.

Reading the report of the 2004 Class Association AGM, I was intrigued to read that some members of the class felt that having such an excellent resource available for free to all on the web might be a threat to the long-term health of the (20 quid a year) Wanderer Class Owners Association.

Hmm... so the fact that lots *more* people than ever before can read loads of great info about the Wanderer dinghy, can organise cruises together, can access shared expertise is a *bad* thing?? Run that past me again?

I suppose that after a while, all public-good organisations conflate their continued existence with the furtherance of their initial aims, blind to the risk that new ways and means of furthering their initial aims might have rendered their long-standing modus operandi redundant.

Posted by tomski at 08:44 PM
Sailing round Britain in a Laser

Ron Pattenden deserves much respect for nearing the end of his epic voyage round the coast of Britain on a Laser. He's been writing a monthly diary in Yachts and Yachting magazine, which makes fabulous reading.

BTW, the Laser is a mere 13 feet long, but has zero stowage, no shelter and a rudder that is frankly much too small for sailing in a decent wind or waves. It is unstable. Very unstable. Sailing one round Britain without an escort to pick up the pieces should things go wrong is mighty brave.

Donate some money via the rather fine Just Giving charity donation web service to support Ron's favoured good cause, the Prostrate Cancer Charity.